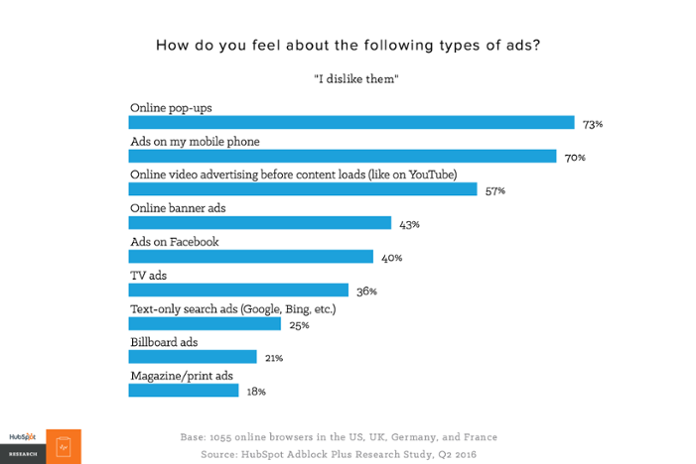 When the internet became popular, advertisers saw its potential as a new media to reach consumers. Unfortunately, this has also led to the creation of the world’s worst advertising medium: pop-up ads.

These pop-up ads are one of the main reasons so many people have installed programs such as Ad Block Pro and uBlock. These programs make it possible for people to experience the digital world without being bombarded by banners and videos as they search the web.

According to a study conducted by HubSpot, Ads on mobile phones (70%) and online video ads on websites such as Youtube (57%) are some of the major forms of advertisements that they dislike; however, pop-up ads, as expected, were the least favorable form of advertisement with 73% of the respondents disliking them. 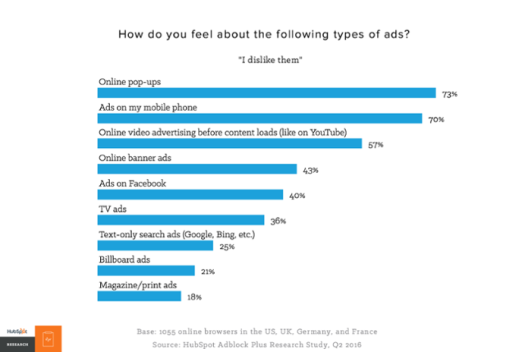 Hubspot also interviewed current users to find out the reason why they installed it and it boiled down to a third of the respondents saying: 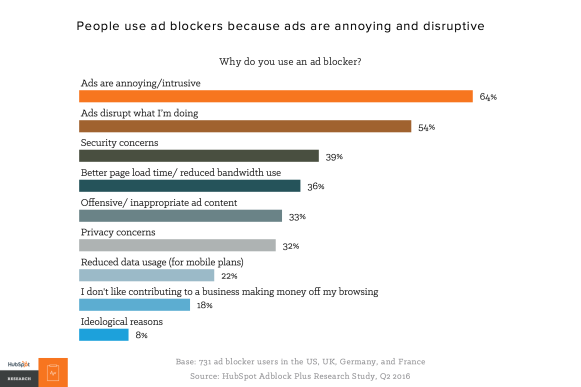 When they say jump, we say how high?

Personally, I think ad block is necessary for the advertising industry.

The more people who download and actively use an ad block program, the louder the message is becoming to advertisers. They are telling us that the well has dried up and that we need to look for new ways to connect with all their consumers.

There are too many companies that have gotten away with lower-quality advertisements and it’s beginning to rebound against them. Advertising has always been about who can do the next best thing, or who can innovate first. Many agencies, such as iStrategyLabs, have found a way to embrace it in order to push them to produce truly incredible advertisements.

iStrategyLabs is one of my favorite advertising agencies mainly because of how creative they are with their messaging. Their use of twitch.tv as an interactive advertising platform is incredibly innovative and a lot of other agencies should take note. They have found a way to produce advertisements that really make people question whether or not they want to block it.

A lot of websites gain their revenue from these digital advertisements, and by using ad block programs, people are effectively taking that revenue away from them.

Now, what are some ways to solve this problem? Unfortunately, it’s not that simple, and a lot of companies are still trying to find an easy fix.

Sponsorships, instead of actual advertisements, are becoming more common as it allows you to connect with consumers by providing their favorite content creators with a way to continue making content.

For everyone else, the only thing I can offer is this:

When you are advertising, try to make content that people want to interact with. Getting a lot of impressions and views aren’t impossible for creative tactics. Creating something innovative and fresh will give your brand or company a lot more impressions than any banner advertisement will.

Embrace ad blockers and use them as a way to better your work. It’s not a wall, but a hurdle. It may be a difficult hurdle to overcome, but that doesn’t mean that there is no way around it. Take it as a challenge to push yourself to create the best advertisement you can possibly do.

If you think that people shouldn’t use ad blockers, I genuinely want to know what your reasoning behind it is. Leave a comment and discuss this with me, I’ll be more than happy to hear you out.